This is an optional tagline field

CELEBRATE: Meet the 2021 BCS Principal of the Year

BCS Family, it is our pleasure to introduce the 2021-2022 Brunswick County Schools Principal of the Year, Dr. Steven Sullivan!!!!

Dr. Sullivan is no stranger to Brunswick County Schools.  He graduated from North Brunswick High School in 1981.  He's currently the principal of the Scorpions.

Dr. Sullivan received his Bachelor of Arts Degree at UNC Chapel Hill, his Masters Degree at Troy State University, and Doctor of Education Degree from Nova Southeastern University.  He also served in the United States Air Force as a Chinese Linquist from 1986-1991.

His career in education began in 1992 where he taught high school English and coached basketball and baseball in North Carolina and Florida.  He has served as an Assistant Principal from 2000-2006 and Principal from 2007 to present.

Dr. Sullivan was surprised by Superintendent Dr. Jerry L. Oates during the September Board of Education Meeting.... 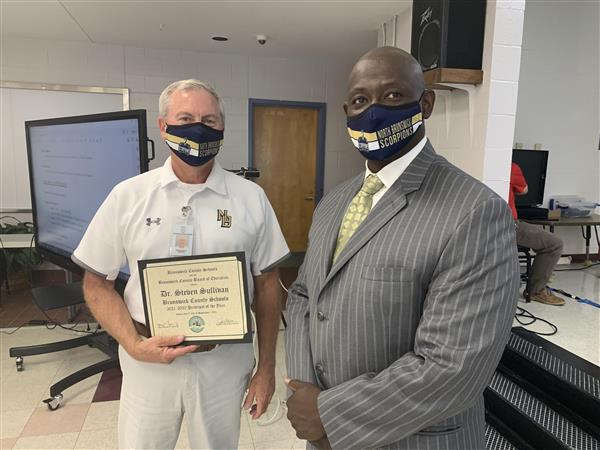